Awarded to a UVJC member who has offered exceptional service to the UVJC to create “mishpacha” (family).  Nominations are due on March 1 and the award is presented at the UVJC Annual Dinner, usually in May.

Past recipients of the Mishpacha Award: 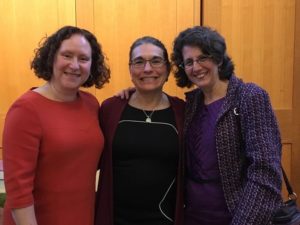 “I experienced one of the most amazing days in my life when I received the mishpacha award. It  means so much to me to be honored for work that I love to do. I was so thrilled that one of my oldest and dearest friends, Sue Berg, (on the right) was able to present the award to me that night, Our families grew up as part of the UVJC. The biggest surprise was having my longtime friend, Rebecca Ivry (on the left), come to celebrate with me from New Jersey. She was the first mother that I met at the UVJC.  I am so grateful for my Jewish community.” – Pam Hausler

The Jewish Federation of NH annually invites Jewish congregations in NH to nominate a volunteer for the Shem Tov (good name) Award. The award is given to those who have shone a bright light and made a difference within each Jewish community.

Past recipients of the Shem Tov Award:

As a member congregation of the United Valley Interfaith Project (UVIP), each year Kol Ha’Emek chooses a congregant to be honored at the UVIP’s Micah Awards Celebration.  Micah heroes live into the spirit of Micah’s words to “act justly, love mercy, and walk humbly” by giving of themselves to help the community.    Here community may be the UVJC community, the larger local community, or the global community.

Nominations are typically due in mid-August and the award ceremony takes place in the fall.

Past recipients of the Micah Award: